How many iterations of this blog will there be?

Caffeine, Caffeine, my kingdom for caffeine 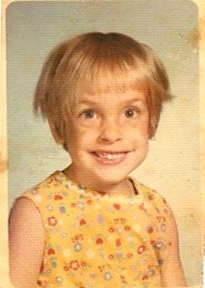 I’m a lifelong insomniac. Check it out. Don’t I look like some jacked up three year old? Seriously, my Mom had to invent a nightly ritual of “Get your drinks and potty and get to bed!” This probably helped my sisters from catching the disease from me. I’m sure I wanted company when I crept out to watch TV when I was supposed to be sleeping and had I been left to corrupt them, well.

After I was denied my excuses, I still had to occupy myself during my non sleep. I remember gazing down from the top bunk to look at my sister across the room, with her ringlet curls splayed out on her pillow. (Shampoo salesmen would kill for a picture of that) I used to fold that satiny edge of the blanket into triangles again and again until it fell apart, only to try again and see if this time I could get all the way across. I used to make odd popping sounds in the back of my throat, for hours on end. (hopefully my sisters didn’t end up with a psychological hang up about similar sounds) I used to “swim” to the bottom of my tightly tucked sheets and explore the deep ocean just like Flipper did.

As I grew, I coped as best I could. I was never the most well adjusted kid, but I made it out of there alive. One day, however, I learned that if you sound hysterical enough, you can excuse your own self from school. After my beloved Grandma passed, for a while there was an excess of Tylenol 3 around the house. One night I was desperate enough to see if it would help me sleep.

Well. Yes. It did. I woke up from a nightmare of swirling colors only to find it didn’t matter that my eyes were open. I wasn’t sure if I would ever really wake up. I really glommed on to the song  Bad by U2. Think, a young Bono screaming, “I’m wide awake! I’m not sleeping, oh no no.

After moving out of the family home, I slept much better. It was not until I learned by a painful empty stomach that Excedrin puts caffeine in their headache formula, that I suspected I had a very bad reaction to caffeine. Turns out, I prefer 7up to RC Cola, the two pops my Pop would bring home regularly. I determined that for me, a soda drank at 5 pm would keep me up til 5 am, only for the alarm to go off a short while later. Symptoms were, a yucky stomach, shakes, heart palpitations and breaking out into random rotating accents.

For decades, I religiously avoided caffeine, barring the incidental stuff you get in Chocolate. Then, one day on vacation, it was early and I didn’t have to get to sleep at any particular time and I drank half of John’s Dr. Pepper. Wow! No wonder people are hooked on this stuff. I felt it zinging through me veins trailing delightful happiness in its wake. So, some time later, I was very tired working my swing shift and I thought, Hells, I’m going to get me a Coca Cola from the vending machine. I warned my co-workers that I might spontaneously start mimicking Crocodile Dundee, but I was amazed that it only gently nudged me into being a bit more alert.

I work a difficult shift, even now, when I no longer take the swing shift, and even with the benefit of prescription meds, I have an occasional bout of sleeplessness. I have a special med in reserve, for those times when it seems there is a pattern developing. Not long ago I used it. The next day at work was difficult. I was working in the inspection department, a darkened room, where I am to search for microscopic flaws in glass. So there I am at my microscope, dazedly spinning my part around when, my eyes just would not focus on the part. Crap! This is my job. This is why I was asked back to work after a three week furlough. And I can’t actually see the part I am inspecting. Lovely.

So, once more to the vending machine, dear friends. I got me a nice little 16 oz Coca Cola around 10 am. No matter that I need to be asleep well before 10 pm, I have drugs, I have good drugs. Well, this strategy seemed to be working quite well, until after lunch. I pinched myself, I got a glass of ice cold water, I walked outside with out a jacket, I left my jacket off, but finally threw caution to the wind (caution???) and sprang for a 16 oz Dr. Pepper. The universe tried to talk me out of it. The vending machine stole a $1.50 from me, and even when I insisted on paying double, it tried to keep the bottle capped. But I persevered, egged on by previous successes with tight lids and a growing desperation, I soon downed my second caffeine clogged sugary concoction of the day.

I managed the rest of my shift, quite chilled with my ventilation fan and no jacket. John and I watched the conclusion of a very intense TV series and the tension I felt during the climax raised my shoulders to my ears. Okay. Then the show was over and my shoulders are still high. My lovely guy helped calm me and I was able to get to sleep with the normal dose of Rx. I didn’t dare pull out the big guns since I had to make a 2 hour drive the following day. Still, it was a very interesting drive that left me with a sore throat and bruised inner thighs and red cheeks.

So, last night, I was so tired I wasn’t sure if I had even taken my Rx. I decided to take 2 thirds of the dose, in case there was some already in my system. It wasn’t until I should have been asleep 3 hours ago, that I remembered some tricks for sleeping when you find it difficult. A few Ohms and I was able to sleep, somewhat fitfully for the next 4 hours. I didn’t stress out about it. I told myself I could cope. Even with out caffeine. Really. But oh, if caffeine could only be a sane option for me…

Strange how when I am overtired, I can feel the little shocks of adrenaline coursing through my veins in a familiar way. It’s all good. I made it through my shift, through my 35 mile commute to arrive home safely and slightly dopey. A fine time to write a blog.

I'm a voice talent in the Pacific Northwest. I have the ability to record audiobooks at my home and deliver them to you. Check out my website at coyotemonster.com